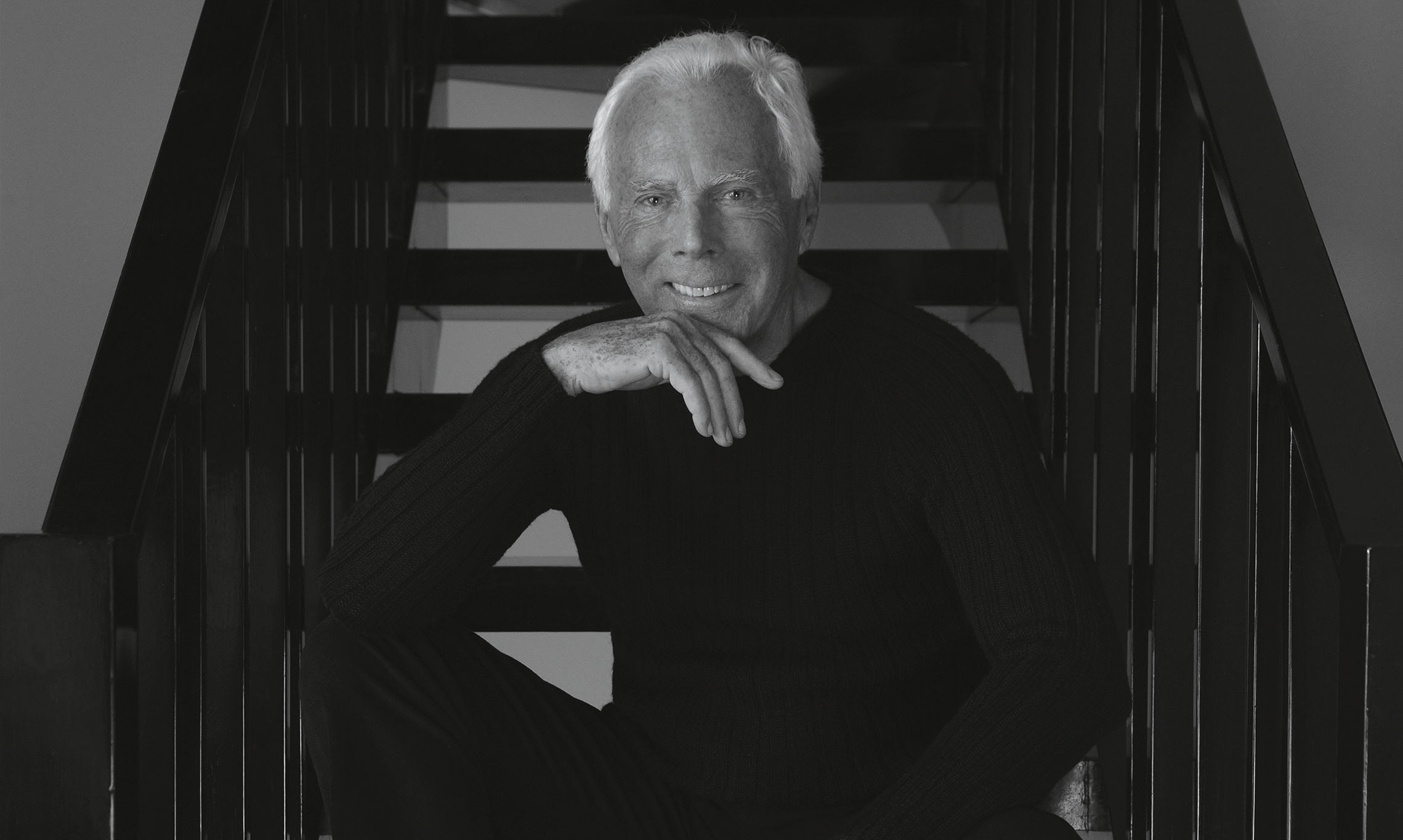 Back in 1982 he was surprisingly featured on the cover of Time Magazine, appointing him as man of the year, an honor that in the field of fashion had only been previously given to Christian Dior. “He is the most interesting Italian that has ever landed on our continent after Christopher Columbus,” Americans say of him. He is an undisputed member of the Olympus for Great Artists throughout History, and today Giorgio Armani speaks in an exclusive interview for our magazine, radiating narrative art and design.

It all started in Florence with Giovanni Battista Giorgini. Today, with the Armani Group headlined by its preeminent brands Giorgio Armani, Emporio Armani, A|X Armani Exchange, Armani Privé and Armani/Casa, what does it mean to be the representative of one of the last privately-owned companies in the fashion industry?

It is a source of great pride and great responsibility, as a designer, as an entrepreneur and as an Italian: being aware of having created a style that is also a lifestyle, with the ability for it to transcend sectors and domains from fashion to design, the pride in having successfully spread it around the world and the conviction of having done everything on my own terms. Not succumbing to the conditioning has brought me to where I am today.

Armani/Casa. Tell us about your design approach. What is more important to you, the space or the input from clients?

When developing bespoke design projects, the spaces and their intended functions always serve as my starting point. Although, client input in this regard is fundamental. For a number of years now – since 2003 – my Armani/ Casa Interior Design Studio has been the vehicle for offering both private individuals and property developers a comprehensive service beginning with the conceptual design phase right through to supervising the execution of the project. Under my supervision, the studio develops specific creative solutions, which are always the result of scrupulous research into architecture, form and materials, moreover, taking into account the cultural context, the geography of the place, and the building structure within which one operates.

The Giorgio Armani sense of design.

For me design consists of the creation of objects, environments, and garments that endure over time without losing their appeal or the ability to enhance the personality of those who have selected them. It is a principle that I apply to everything. It is a matter of taste, and my taste reflects a predilection for sophisticated linearity.

How would you define the style of Armani/Casa?

A preciously essential style, that is never excessive: beauty is delivered with simple lines, sophisticated materials, workmanship of the highest quality. Aesthetics and functionality inextricability linked together, ensuring the environment in which one lives is in synch with the person, thus becoming a place that makes one feel completely at ease. These are all elements that create inevitable timeless aesthetics, because something that embodies beauty, elegance, simplicity and linearity is destined to never go stale.

How did you combine the Armani Casa style with your creative ideas from the fashion universe?

I have always taken an interest in promoting ongoing and subtle innovation: this is the manner in which the classic is constantly being reinvented, softened and made more fluid, thereby resulting in its being updated. The principle is applicable to fashion just as to the home: therein lies the link. I like to think that my work is perceived to be constantly evolving; it is certainly not a victim of trends that die after six months, and that often chase after each other with neither consistency nor solidity, as in fashion, so in design.

What does being “sustainable” signify? Do you believe that the market should be “educated” on these issues?
Sustainability represents a central theme for me, as a matter of ethics rather than strategy, because attention to the environment should concern all of us as inhabitants of this planet. In the fashion industry, due to its very nature, which consists of offering new items every season, this is certainly a complex issue. In my own small way, I feel that I act in a sustainable manner: in offering clothing and objects that stand the test of time, that may be worn and used even years later. Since I don’t think that the label of “sustainable” belongs only to those who produce capsules made for example with ecological fabrics, in this regard, I am interested in researching and finding innovative materials. Recently, for example, even in the Casa collection I used a particular material derived from recycling and regeneration of other sustainable and inventive materials, for one of my new design
pieces: it is the weave of synthetic and sustainable fibres for the Osamu candle holder set. Framed in these terms, with research and experimentation inserted into a broader vision, I find the theme stimulating.Otherwise, sustainability becomes no more than a neat communication trick.
You have effectively combined creative talent with entrepreneurial ability. What is the key element in the Giorgio Armani DNA?
It is the essential union of pragmatism and taste. That is the ability to dream, while also retaining concreteness: a delicate balance that I’m able to effortlessly maintain, which translates into a style characterised by its purity and vibrant linearity, without ever being “cold”.
Forerunner or revolutionary?
Original and independent. I’ve always done everything my way, really addressing myself to the people. Does this make me a revolutionary? Perhaps. It is certainly a revolution that I undertook below the radar.
Armani/Casa, 41 stores in 29 countries, what are the forthcoming openings?
For the near future a plan for international store openings is in the works, with more fluid, modular solutions, which remain desirable with respect to the selection of materials, and will be easily reconfigurable based on the nature of the objects on display. Furthermore, various restyling projects have already been undertaken or are planned: the renovated version of the Ginza Tower in Tokyo has recently been reopened, while the Armani/ Casa boutique in Los Angeles will undergo expansion to almost double its current size by the summer, and the Paris store will reopen in the fall after being restyled in the model of the flagship store in Milan.
Future projects?
Armani/Casa is the component that completes my vision as a designer. I find satisfaction in designing and furnishing spaces. My objectives include consolidating the offerings in furnishings and at the same time in the Interior Design Studio. I would like for my idea of lifestyle to become an unequivocal and enduring concept.
Web: armani.it
Share: