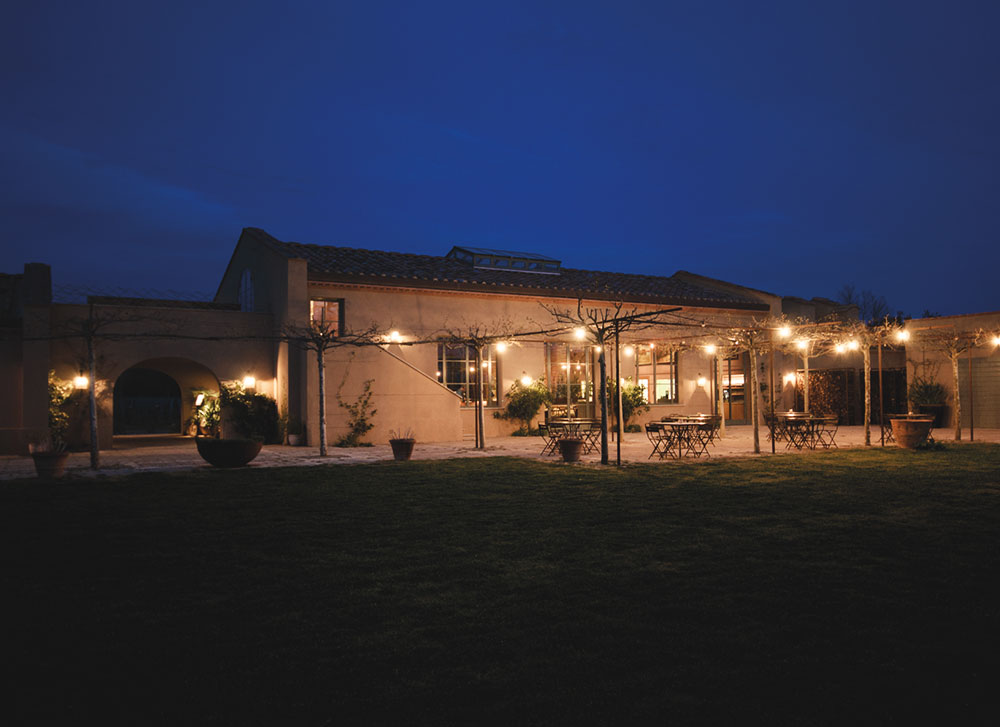 Via Aurelia – the ancient road from Rome that led towards the West – divides the property into two parts, leaving the coast and sea on your left and Viale dei Cipressi on your right, the famous boulevard of cypress trees that is so dear to Carducci. The Tenuta Guado al Tasso is thus situated in the Bolgheri amphitheater, a series of gently rolling hills surrounding a coastal plain that provides a unique microclimate with signi cant temperature uctuations.

Guado al Tasso’s vineyards are found at the foot of the hills, and at night cold air from the hills comes down to the rows of grapes, giving them a strong aroma and the perfect ripeness, resulting in wines made in a terroir with great character, elegance, depth and complexity. Matarocchio was born in 2007 from a great harvest and the desire to create a wine that highlighted a single variety and a single plot at Tenuta Guado al Tasso. “It was an experiment that soon exceeded all expectations,” says Marco Ferrarese, winemaker at Tenuta Guado al Tasso.

“We knew that the terrain was particularly suitable for Cabernet Sauvignon, but we had no idea that Cabernet Franc could be expressed so well here.” Matarocchio is produced exclusively in exceptional years when Cabernet Franc grapes are extraordinarily high-quality.

Guado al Tasso was created to represent the highest expression of the re nement and complexity of the terroir in Bolgheri. It has been produced since 1990 from Cabernet Sauvignon, Merlot, Cabernet Franc and sometimes a small portion of Petit Verdot grapes from the vineyard of the same name situated on alluvial origin soil, from clayey-sandy to clayey-silt with conglomerates from Bolgheri present. Cont’Ugo comes exclusively from Merlot grapes, lending an entirely new perspective to its interpretation of Bolgheri’s lands. The vineyards are situated between 45 and 60 meters above sea level on clayey-loam soils of mainly alluvial origin, giving Cont’Ugo great depth and complexity, preserving the fragrance and exuberance of the fruit typical of Merlot. 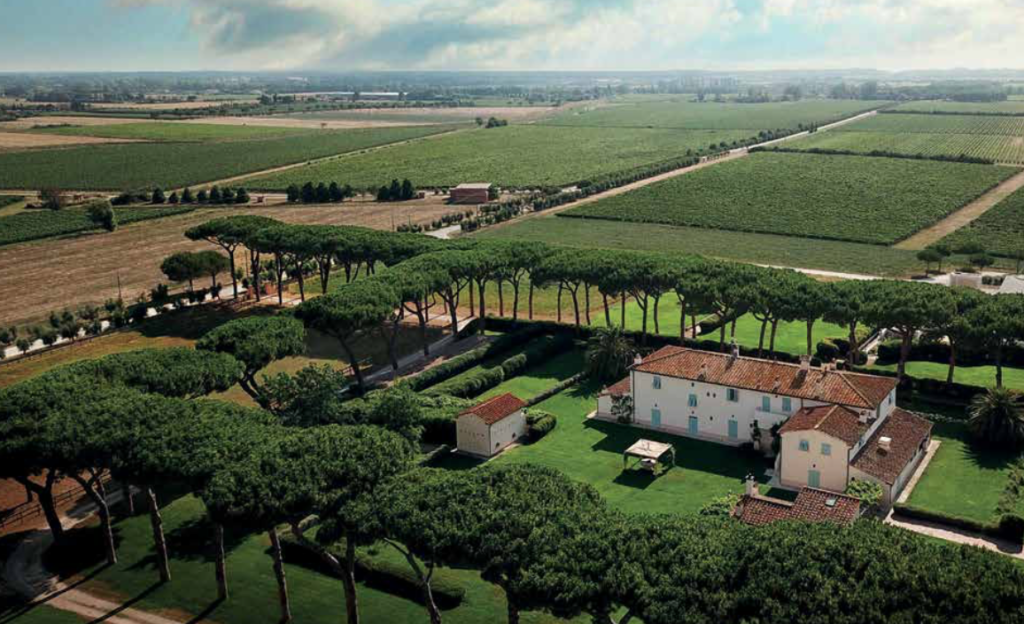 Bolgheri DOC Il Bruciato was born in 2002, from one of the most dif cult harvests at Tenuta Guado al Tasso; its name comes from the woods found on the property called “La Macchia de Il Bruciato.” Carefully selected Cabernet Sauvignon, Merlot and Syrah grapes come from vineyards on soils with a wide geological variability, capable of expressing great complexity. Scalabrone Bolgheri DOC is a rosé with a strong and intense aroma thanks to Cabernet Sauvignon, Merlot, and a part of Syrah grapes. Both the vineyard and the wine get their name from the bandit “Scalabrone” who lived in this area in the early 1800s, and the vineyard is situated on clayey-loam soils of mainly alluvial origin, rich in pebbles.

Vermentino – Bolgheri DOC was born in 1996 from the desire to rediscover a native variety characteristic of the Tyrrhenian coastal area. Both the land’s topography and its proximity to the sea give the wine a marked minerality and freshness as well as enhance its aromatic component. Overlooking Via Bolgherese, otherwise known as the “wine road”, in the area of San Walfredo farm, we nd the Osteria del Tasso, a delightful restaurant surrounded by Tenuta Guado al Tasso’s vineyards. A favorite place of the Antinori family, it encompasses the charm of a harsh and fascinating land in traditional dishes that are from the Bolgheri area. Traditional dishes are revisted with a contemporary touch, accompanied by a wide selection of labels from the Antinori family estates and beyond. Flavors, aromas and colors of the sea meet those from the back country, expressing the harmony of a unique place. 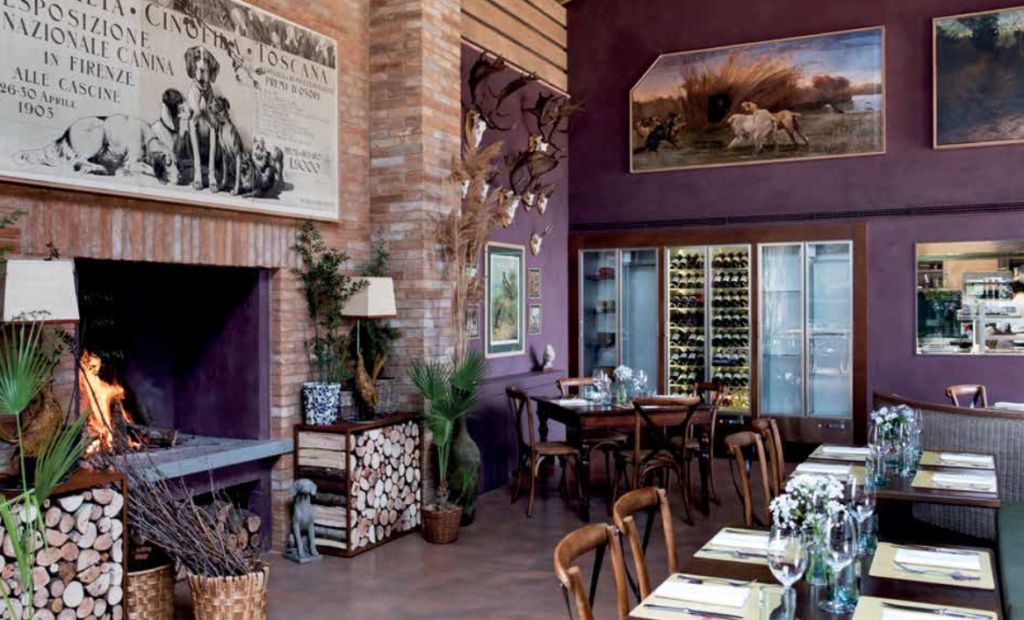 The wine list was created with the intention of representing the many nuances of Bogheri DOC through the interpretation of various producers in the Bolgheri area. In addition to the wines from Tenuta Guado al Tasso and a selection of Antinori wines, every single producer associated with the consortium was invited to choose their own wine for the restaurant’s menu which was representative of and honored this land. In Guado al Tasso’s Bottega, next to the restaurant, you can taste and buy wines from Tenuta Guado al Tasso. In addition to wines, there are also some Cinta Senese salami of own production coming from the Macchia del Bruciato. Through the shop it will also be possible to book personalized visits to the vineyards of Tenuta Guado al Tasso, tailor-made for the great enthusiasts to discover the historic vineyards of the estate.