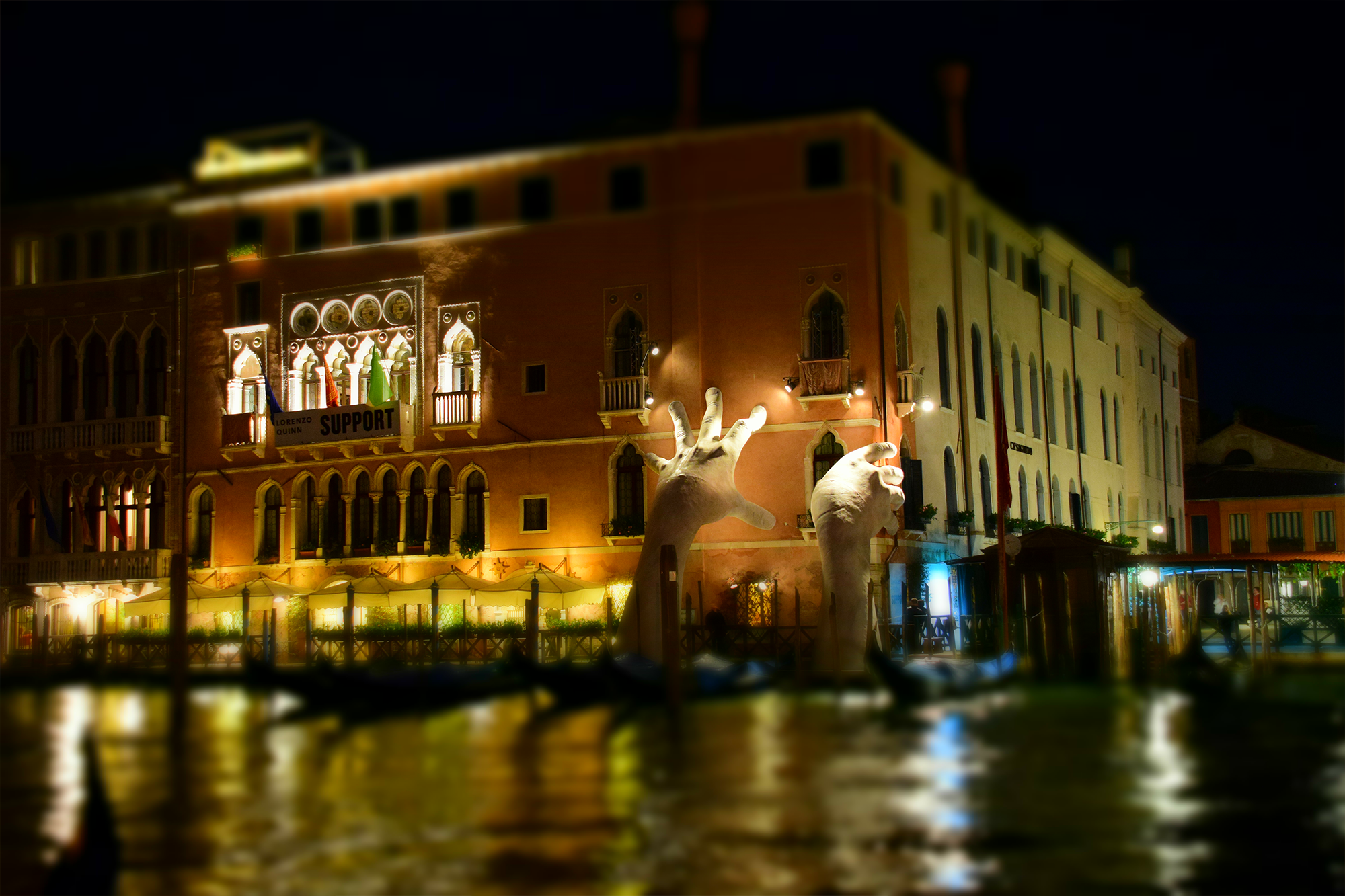 Hands are tools that can destroy the world yet save it too; they transmit an instinctive feeling of nobility and greatness that can also elicit concern, since the helpful gesture of supporting the building also highlights its fragility.” This monumental installation was designed by sculptor Lorenzo Quinn, and for a year has supported the historic Hotel Ca’ Sagredo, overlooking the Grand Canal. “Hotelier” and Director Lorenza Lain describes Ca’ Sagredo’s hospitality in the following interview.

The inauguration of this marvelous boutique hotel dates back to 2007, and you have been a part of the project since the very beginning. What moments stand out in more than ten years of this journey?
There have been many important moments: Ca’ Sagredo’s involvement in the most prestigious international networks in our sector over the years, and all of the awards that we’ve received year after year. The culmination of celebrations last year for the 10th anniversary of our opening, especially with the installation of artist Lorenzo Quinn’s work “Support for Ca’ Sagredo” which became the very symbol of Venice during this last year from May 12, 2017 to May 7, 2018. Can you describe your relationship with art?
I am very devoted to art; in fact, I have a degree in Far East Art, with a specialization in Contemporary Chinese Art.

How did your collaboration with Lorenzo Quinn come about?
Lorenzo and I are related, since Lorenzo is my husband’s cousin. In fact, his mother Jolanda Addolori is Venetian, and his father is the famous actor Anthony Quinn. During his 50th birthday celebration in 2015, I asked Lorenzo to create a work for the Venice Biennale. I wanted a creation that could make a strong impact, be visible to all and dedicated to the city. Lorenzo created ‘Support for Ca’ Sagredo,’ two enormous hands that emerge from the Grand Canal and support the Palazzo – a symbol of Venice and its fragility, yet at the same time its beauty that must be preserved. It is the first time that a hotel has become
an integral part of a work of art, and we are in the Guinness Book of Records as the most viewed and photographed installation of all time, with over 240 million shares.

What do Ca’ Sagredo’s clientele want? Is the service the real luxury? What can you find here that you can’t find elsewhere?
Even before Ca’ Sagredo was a hotel, it was and is a “home.” What makes Ca’ Sagredo unique is the way it welcomes you, with the same warmth and love for beauty that is typical of a private residence. The hotel is full of precious details and works of art from all over the world, ranging from antique to modern. The following thought is what guides me: Palazzo Sagredo is a wonderful “container” where the experience of sleeping, having breakfast, looking out over the Grand Canal becomes participating and appreciating the setting, accentuated with ad hoc events. The Palazzo is a perfect example, in that it is being cared for, but it also responsible for creating and offering cultural opportunities for all “curious travelers” and for Venice as well. All of these ideas come from a network of what could be defined as the creative industry of Venice, represented by the Biennale, the Querini Stampalia Foundation, the Peggy Guggenheim Museum, and the Civic Museums. In addition, historians and art historians from various countries’ consulates offer precious contribution (the yearly Independence Day celebration is famous), as do the Venetian Hoteliers Association (where Lorenza holds the position of councilor for the five-star category) and Alta Gamma, the laboratory from Ca’ Foscari University.

What have you been awarded recently?
Dr. Lain, Director of Ca’ Sagredo Hotel, received the Excellent Award for “Tourism Personality 2017”. The Excellent Award – an event created by Communication Agency President Mario Mancini, and promoted by magazine Master Meeting – is the most important award in the tourism sector and aims to recognize the merits of entrepreneurs and managers who have contributed to the development and enhancement of tourism with their enterprises, something that is a true strategic asset of our country. Ca’ Sagredo won the I Love Travel Award for “Most Romantic City Hotel” in Europe.

What are the pivotal characteristics of a general manager?
I don’t have a clear answer to this question, in the sense that I don’t consider myself a general manager by definition. I am not a director who just stays in the office, I want to know who comes, who goes, I want to personally meet the most important guests – we only have 42 rooms so I’m able to do this – and I do everything that a hotelier would do. Passion gives meaning to my business every day, and this passion comes from deep within – more specifically, from my personal history. I am the daughter of a diplomat, an Air Force general, and I had a very strict upbringing, but it introduced me to the world. My maternal grandmother taught me to live to the fullest; many of my personal experiences were gained with traveling, especially in the Far East. At the age of 10, I moved to Brussels with my family, where I attended Ecole Européenne and I went to study in many countries, including the United States. I have a degree in Oriental Languages and a PhD in Contemporary Chinese Art from Jussieu University in Paris. My studies brought me to China at the age of 22, where I began learning about the hotel industry at the Sheraton in Beijing. Despite being somewhat of a nomad, I feel profoundly Italian. So, divided between two souls – a creative one open to alternative experiences and one that is disciplined – I decided that working in hotels would become my profession. And Venice, which I dearly love, became the city where I would live.

Future events?
Many. I am already working on the next project, after the “hands,” for 2019. I can’t say too much…but I can give a little preview. In the city of poetry, I want to give time and space to the most intimate and most profound type of art. And to “shape” this idea, I’m working with the artist who has most created this, invented this, worked on this, turning poetry into amazement. I’m convinced that even poetry has great “hands” that embrace beauty: they are invisible hands that embrace Venice, which is the very essence of beauty and poetry.