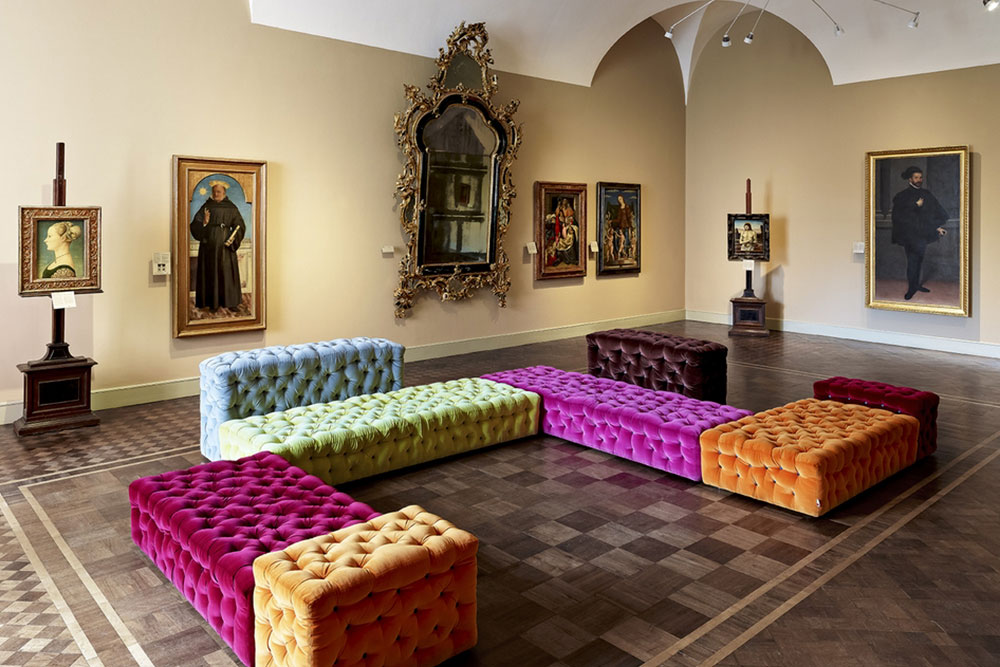 In a big city where everyone is in a hurry and everything is chaotic and confusing, even classic galleries and museums seem to absorb this atmosphere. Whatever some may say, Milan is a city of art in all respects with more than fifty museums, galleries, and institutes. But let’s forget all this and focus on a context that is cozy, unique, almost familiar: Milan’s house museums. These four museums perfectly describe Milan’s past way of life and allow us to discover spaces and passions of the families who lived there. To begin with, let’s go into the heart of the fashion district – in via Manzoni 12 to be exact – where a stately and noble palace stands amidst luxurious shop windows, posh banks, and all the city traffic. Enter the main courtyard, and you will find yourself at the Poldi Pezzoli House Museum. It creates a powerful first impression – a large baroque staircase with a fountain at the base brings you to
the noble floor to admire the family’s art collection.
Gian Giacomo Poldi Pezzoli was a prominent collector and the most important art exponent in the 1800s, and inherited his passion for collecting art from his mother Rosa Trivulzio. Artists whose works are found here include Tiepolo, Perugino, Botticelli, and Piero della Francesca to name just a few. Visitors are perhaps most impressed with the Dante Study which was nothing more than Gian Giacomo’s bedroom; this space’s distinctiveness comes from the window that traces the history of the great poet and his most renowned work. Speaking of contemporaneity, the Poldi Pezzoli house is not to be considered as only a museum ofantique works because inside very interesting design choices were made, such as that of adding colorful and comfortable designer sofas to the exhibition rooms that break up areas and make the atmosphere even more familiar.
Staying on topic – ending the visit to the ground floor you will surely be surprised by the fully-equipped hall of arms, designed by artist Arnaldo Pommodoro who set up swords, weapons, and armor like a cinematographic set so the atmosphere blends in with the works. Staying in the district and going down peaceful Via Gesù, we find the house museum Bagatti Valsecchi. The protagonists are two brothers, Fausto and Giuseppe Bagatti Valsecchi, who decided at the end of the 19th century to create a new residence in Lombard Renaissance style where their family’s home stood, and then furnished it with objects and works from the 1400s and 1500s. Even the names of the rooms remind you of times long ago like the Room of the Fresco, Red Room, and Gallery of Arms, not to mention the beautiful Bevilacqua Room with its original fireplace that will certainly make you imagine yourself in a long velvet garment listening to a harpsichord resounding throughout the house. Now we completely change both the area and atmosphere to visit the third house, where we are now in the 1930s in a zone of great expansion like that of Buenos Aires /Loreto. Here in via G. Jan 15 to be exact in a building designed by the famous architect Portaluppi, we find Casa Boschi di Stefano. It was once the residence of a prominent couple from the Milanese bourgeoisie – Antonio Boschi and Marieda Di Stefano – who began collecting works of great value from artists such as Carrà, Manzoni, De Chirico, Boccioni, Severini, and many others. What is truly striking about the house is the quantity of works that aren’t featured on the walls, immersing visitors in shapes and colors that can only be expressed in art.

Not to be sacrilegious but the room that most impressed me was the bathroom, and how! For me to see those details and somewhat Art Deco somewhat rational style makes this room both very interesting as well as technologically advanced for its time. Noteworthy in concluding is the interior design which includes original furniture, sofas, and consoles from the ‘30s to the ‘50s, as well as Murano chandeliers that still light this home, all of which truly make it a hidden gem in this city. Let’s end on a high note as they say with a home, although defining it as a home is an understatement, situated in the prestigious neighborhood of Porta Venezia. Villa Necchi Campiglio is a villa in the middle of a private park in the heart of the city, owned by a family that is very well-known in the industrial sector. Originally from Pavia, the family needed a house for staying in Milan in the early 1900s and chose this beautiful area to build what would eventually be called one of the most modern houses in Milan, almost too much. We have already heard of the architect in charge – Pietro Portaluppi – who designed this villa with rational forms and highly prestigious interiors. To understand the importance of the house and its guests, the “Princess’ Chambers” was set up on the first floor for the exclusive use of Maria Gabriella of Savoy.
Returning to the subject of modernity, we start outside where one of Milan’s very first private heated pools is located along with the city’s first covered tennis court. However, all this modernity actually created a few problems for the family who had to completely redesign the reception hall with a more classic touch given the criticisms from the upper- bourgeoisie. One of the most curious aspects of the home are the rooms of the two Necchi sisters where even today visitors can peek into their wardrobe for a glimpse of handbags, coats, and shoes showing the period’s fashions. The house’s bathrooms and works exhibited there are of the highest value, but even the service rooms for the domestic help are intriguing, equipped with technology that was state-of-the-art for the time and even surprising today. Finally, I recommend watching a beautiful and profound film by director Luca Guadagnino titled “I am Love” presented at the Venice film exhibition and set in Villa Necchi. Our journey through Milan’s house museums is over but I’d like to point out that what unites these places and perfectly describes the serious Milanese ethic of collaboration is having established the “House Museum Circuit” in 2008, aimed at bringing together projects and events, creating a network between them.
Web: casemuseo.it
Share: